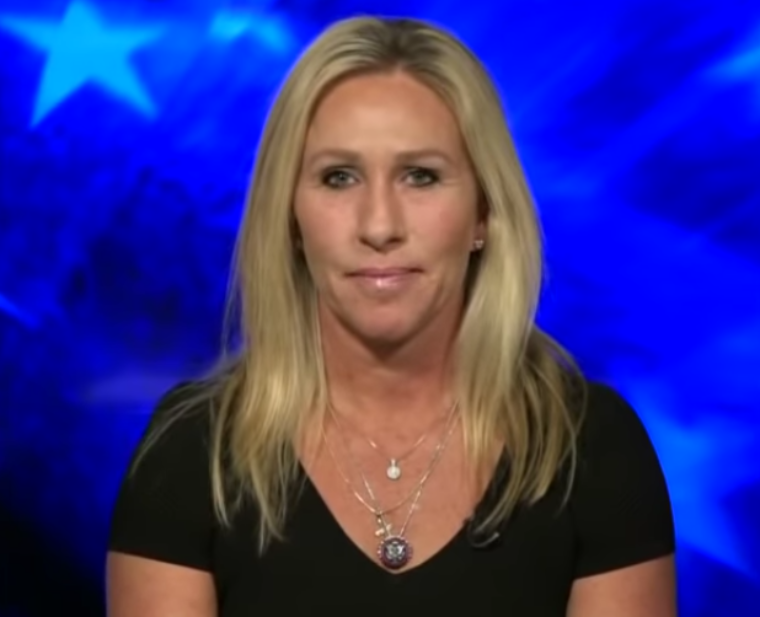 “Joe Biden didn’t win the 2020 election and everything we’re seeing is a result of that,” Greene told Steve Bannon during an interview on his podcase Real America’s Voice.

“And it’s going to frustrate our voters,” she explained. “They are sick and tired of electing people over and over again that continue to fail us, continue to create more debt, and continue the long slow slide into a communist country.”

“We need a good plan that restores America back to the republic that it was founded to be,” the Republican lawmaker said. “Because our freedoms are so precious, Steve, that we do not want to lose them, and the only way you get freedom back after you’ve lost it is with the price of blood.”

“And no one wants a civil war in America. And that’s why I’m going to be pushing hard in my Republican conference to hold not only Democrats accountable but Republicans accountable as well,” Greene added.

Greene read the names of Republicans who backed the recently-signed infrastructure measure later in the show.

“Don’t do any death threats,” she said as she urged the audience to confront the 13 Republicans who she has called “traitors.”

Recently Greene stated that she had no real interest in being part of politics anymore.

Greene grumbled on Steve Bannon’s show that too many Republicans in Congress were allegedly hesitant to do what she feels is required to oppose President Joe Biden.

“The stupid Republicans that just won’t push the line and won’t cross the line and won’t go far enough, because they’re scared!” she fumed. “Because somebody might stand up and challenge them, or someone’s going to write a bad news story, or simply whatever it may be!”

Greene accused Republicans of being weak as well.

“It’s not the Democrats that are screwing you, it’s our own party,” she lamented. “And that is what happened, just like you said, Steve, after the Tea Party wave back in 2009 and 2010, when we took over and things that were supposed to be better, the Republican Party turned around and failed us!”

Greene said that it was her failures that motivated her to run for Congress, despite the fact that she later stated, “I don’t want to have anything to do with politics.”

Greene also alleges that a DC jail-holding individuals arrested in connection with the Capitol disturbance on January 6 “torture people” and “wants to re-educate them.”

Greene tried to depict the men as patriots by alleging that they draw drawings of the American flag and cry while singing the national anthem every night at 9 p.m.

On Thursday night, the Georgia congresswoman paid a visit to the jail’s “patriot wing.”

“Last night I finally got into the deplorable jail, the DC jail where these people are being held for months on end in conditions as I’ve never seen in my life,” Greene told Bannon.

She said that the homeless in Washington, DC, and the inmates at Guantanamo Bay were living in better conditions than those in this facility.