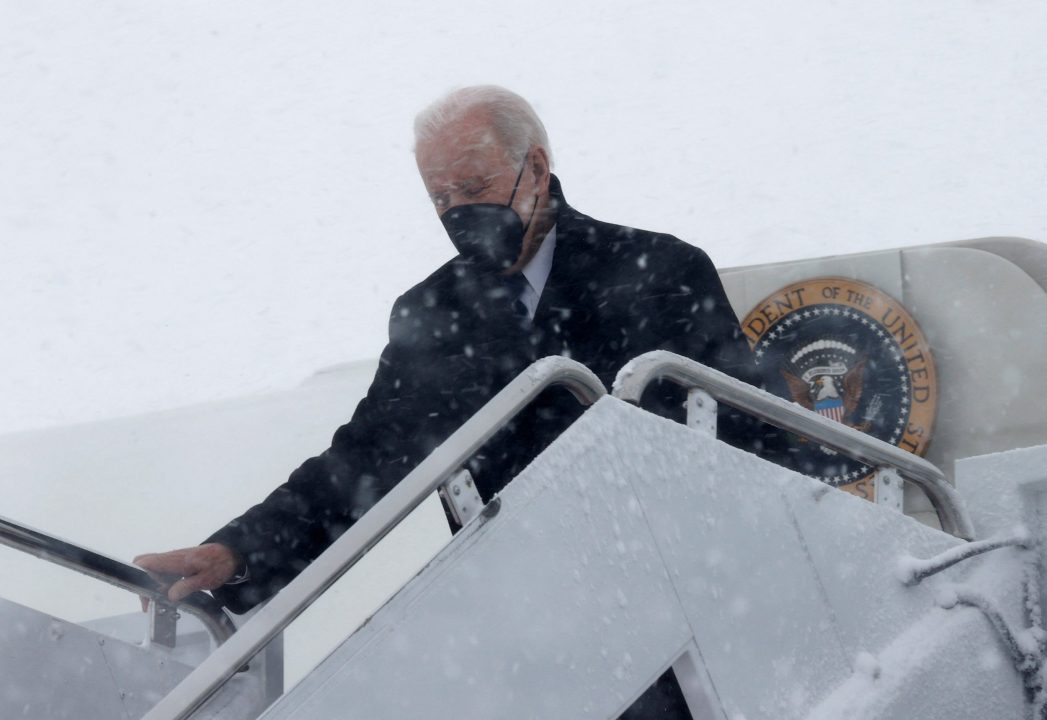 This past Monday, Air Force One spent a good deal of time stuck on the tarmac at Joint Base Andrews as the flight crew, along with President Biden himself, waited on board for groups of snowplows to show up and clear a path, both for the plane itself to dock and for the rolling staircases used to disembark its passengers.

Prior to the plane’s departure from Delaware, the plane was subjected to extensive de-icing after Old Uncle Joe spent most of the past Christmas holidays there celebrating. Despite the fact that most federal offices were slated to be closed this past Monday as the area battled horrid weather, Old Uncle Joe is still expected to go and be present for an event aimed at “boosting competition & reducing prices in the meat-processing industry.”

“As snow blankets D.C., Air Force One is being de-iced as President Biden prepares to return from Delaware. Federal offices are closed, so the press briefing is canceled but we’ll see Biden during an event on boosting competition & reducing prices in the meat-processing industry,” stated Kaitlan Collins, a White House correspondent with CNN.

Multiple groups of reporters shared photos taken of the arrival of Air Force One and of the ground crews fighting the snow at JBA as they attempted to make ready for the arrival of the president from Delaware.

In what looks like terrible conditions for any air travel, Air Force One returns to Joint Base Andrews in a snowstorm. pic.twitter.com/qjFj9hKZVd

Air Force One landed @Andrews_JBA about 30 minutes ago. A delay in @POTUS coming off the plane, however, due to the equipment and personnel trying to cope with the inclement #weather in #Maryland. pic.twitter.com/SS3pJNVngi

Austin Landis, a national politics reporter for Spectrum News, stated that even once Air Force One had landed at JBA, the ground crews were still feverishly working on efforts to clear a path for the president and crew to disembark.

“Ahead of the president’s arrival, so much snow had fallen here at Joint Base Andrews that Air Force One had to taxi for 28 minutes before parking,” claimed the reporter.

The act of moving and making use of the moving stair systems that President Biden and his flight crew could get off the plane also proved problematic due to the extreme cold and icy weather.

There was a bit of trouble with the Air Force One ramp stairs just now… pic.twitter.com/Xke891tnPE

“Snow plows had to clear the way for Air Force One as it taxied at Joint Base Andrews, with President Biden deplaning in the snow moments later,” stated Collins.

Snow plows had to clear the way for Air Force One as it taxied at Joint Base Andrews, with President Biden deplaning in the snow moments later. pic.twitter.com/I7VCBv4rz0

President Joe Biden arrives aboard Air Force One during a heavy snow storm at Joint Base Andrews, Maryland. Photo by @j_ernst_DC pic.twitter.com/meujiFyYKw

Currently, large swaths of the mid-Atlantic area are fighting against a winter storm that was slated to last until late Monday evening, sporting expected snowfalls ranging from four to eight inches in a few areas. As reported by CNN:

More than 20 million people are under winter storm alerts Monday, as a strong stormsystem works its way across the eastern US.

The federal government in Washington, DC, is closed Monday, and weather-related disruptions are being felt across the country. Many schools have canceled classes, and the hundreds of thousands of customers are without power.

Snowfall totals of 4 to 8 inches are possible across the southern Appalachians, and areas of the Mid-Atlantic could see accumulations of up to 8 inches through Monday.

The post Air Force One Stuck At Joint Base Andrews Waiting On Snow Plows appeared first on Steadfast and Loyal.