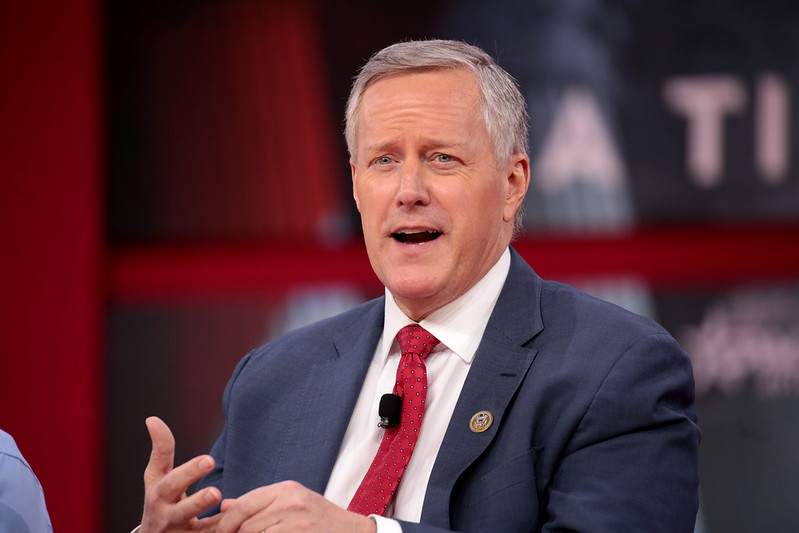 After working with the committee and providing evidence, former Chief of Staff Mark Meadows unexpectedly withdrew his cooperation with the House Select Committee on Jan. 6.

Meadows stated that they chose to withdraw after learning that the House Committee had subpoenaed phone records, which is often done to better understand the questions to ask the witness.

Chairman Rep. Bennie Thompson (D-MS) unveiled a 38-page PowerPoint presentation titled “Options for 6 JAN,” according to Hugo Lowell of The Guardian’s congressional team. The committee also identified “some text messages on his personal cellphone that he relinquished after Jan. 6,” according to the report.

Meadows agreed to waive executive privilege on the PowerPoint and text exchanges, according to Thompson’s statement on Tuesday.

In the letter dated Nov 26,021, Meadows’ lawyer, Thompson explained “Mr. Meadows provided to the Select Committee certain documents that you obtained from Mr. Meadows’ personal email account and determined were responsive to the Select Committee’s subpoena. In doing so, you also provided a privilege log indicating that you withheld several hundred additional documents from Mr. Meadows’ personal email account based on claims of executive, attorney-client, or other privileges. Despite your very broad claims of privilege, Mr. Meadows has also produced documents that you apparently agree are relevant and not protected by any privilege at all. Those documents include:: a Nov. 7, 2020, email discussing the appointment of alternate slates of electors as part of a ‘direct and collateral attack’ after the election; a Jan. 5 2021, email regarding a 38-page PowerPoint briefing titled “Election Fraud, Foreign Interference & Options for 6 JAN” that was to be provided ‘on the hill’; and among others, a Jan. 5 2021, email about having the National Guard on standby.”

Meadows withheld over 1,000 text messages from his mobile phone, which he handed over to his cell phone company after Jan. 6, 2021, according to the letter.

“The text messages you did produce include a Nov. 6, 2020, text exchange with a Member of Congress apparently about appointing alternate electors in certain states as part of a plan that the Member acknowledged would be ‘highly controversial’ and to which Mr. Meadows apparently said, ‘I love it’; an early Jan. 2021 text message exchange between Meadows and an organizer of the Jan. 6 rally on the Ellipse’ and text messages about the need for Trump to issue a public statement that could have stopped the Jan. 6 attack on the Capitol,” the letter also says.

Meadows’ recent allegations that the committee doesn’t respect former President Donald Trump’s privilege are flatly incorrect, according to the letter.

“Mr. Meadows’ refusal to appear is motivated by, among other things, the documents the Select Committee staff provided to you in advance, pursuant to your request for an accommodation. You go on to suggest that those documents somehow indicate that the “Select Committee has no intention of respecting boundaries concerning Executive Privilege.” That assertation runs counter to the stated purpose of the Dec. 8, 2021, deposition, which was to give Mr. Mfeadows a chance to answer the Select Committee’s questions or assert and articulate a specific privilege he believes protects that information from disclosure,” the letter says.

Meadows’ lawyer is informed in the letter that they attempted to identify the areas of investigation Meadows believed were protected, but he and his lawyers were unable to do so. As a result, Thompson stated that he would interrogate Meadows about those statements “question by question.”

“That is not a lack of respect for the boundaries of executive privilege but rather an appreciation for the proper process for asserting any protective privilege,” Thompson wrote.

“Even as we litigate privilege issues, the Select Committee has numerous questions for Mr. Meadows about records he has turned over to the Committee with no claim of privilege, which includes real-time communications with many individuals as the events of January 6th unfolded. We also need to hear from him about voluminous official records stored in his personal phone and email accounts, which were required to be turned over to the National Archives in accordance with the Presidential Records Act,” said Thompson’s statement.

Meadows’ claim of executive privilege on emails and text messages from his personal cell phone and personal email, according to Thompson, implies he didn’t follow the Presidential Records Act, which requires all records to be given over regardless of their level of privilege. The National Archives would subsequently be in charge of those records. Republicans made the same objection about Hillary Clinton’s personal email server, which they claimed should have been turned over to investigators.

The 1978 statute “codifies the process by which former and current Presidents conduct executive privilege reviews prior to NARA’s public release of material” (which had formerly been governed by Executive order 13489).

This is just one of the numerous reasons the committee stated that it had no choice but to hold Meadows in contempt of Congress. He looks to be picky about which issues he will waive executive privilege on.